In 2019 there will be 5 Eclipses!   Here are the dates for each, Orthographic maps, and animated diagrams.

ps. I will be providing another blog for Eclipses…but astrologically based.

Meanwhile you can learn about Eclipse Magical working (esoterica & ceremonial), you can check my Eclipse Magic Book here on my blog 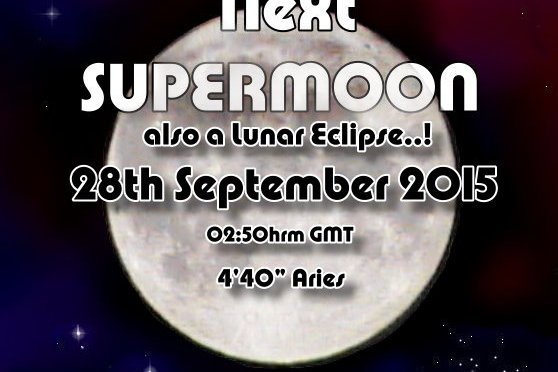 Super-Full Moon!  A beautiful sight, it may be, but is there anything more to this – other than that? Here in the Solar system, we have 9 `planets’ with a huge number of their own satellites (moons) and asteroids, all orbiting the Sun. All sorts of geometrical effects can be viewed from Earth, as a result of all these.  Astronomers don’t get excited much about many of these `events’ – but since Astrology presumes that what happens to stellar bodies has an influence on us and our human lives, astrologers to get excited about various phenomena.

Facts We have just had one of these – Supermoon!   It is when the full moon appears to be bigger than average. It can be about 14% bigger (in diameter) and about 30% brighter..than an average full moon!  These occur approximately once every 14 full moons. The next one is on 10th August 2014. The term `Supermoon’ was coined by astrologer Richard Nolle in 1979, arbitrarily defined as:

Why? The moon is closer to Earth, so it appears bigger and brighter. That’s the observation. But why is it closer to the Earth? The orbit of the moon around the Earth is not circular but elliptical.  The moon completes this orbit once every 29 days, so in that time, at one point, it will be furthest away from the Earth  at about (apogee) at 406,000 km distance , and 14 days later, closest to the Earth (apogee) at 357,000 kilometers from Earth .  So when a full moon  coincides with the point when it is closer to Earth, we call it a Supermoon! (scientific term is  perigee-syzygy of the Earth-Moon-Sun system!)

SUPERMOONS between  2014 to 2020 Here are the dates of the  minimum Perigee (moon closest to Earth)  and nearest Full moon to those dates (Supermoons) ..  f Perigee  data taken from Fred Espenak. Full moon date from The American ephermeris for 2000-2050.   Table created by me (Mani Navasothy)

Note: I’ll double check the rest of the data for this and amend if I find any errors in my matching nearest `supermoon’ to the perigee data. (Anyone of you can do the same..by checking the perigee/ apogee data and looking up full moons near those dates in an ephemeris of course!) -Mani Navasothy (astrologer)

here’s a fabulous world map / data by Fred Espenak of NASA.   (His website is one I use regularly for a lot of astronomical data, especially Eclipses…and now for this. If you are quoting this or him, please  due acknowledgement to Fred Espenak.  Thank you)

Transit of Venus- what is it and how does it happen:

Venus transit (and eclipses) are all similar..   In Solar Eclipses, the moon comes between us on earth and blocks the Sun for a bit.  In transit of venus, the planet Venus comes and blocks the Sun out. except because the Venus is further away from us, but closer to the Sun, it doesn’t `seem’ to cover the whole of the Sun..  It just appears as a small spot passing across (in front) of the Sun.

Because of orbits, geometry (relationship between shapes, distances, angles) and speeds of planetary motion,  the transit of Venus  `happens’ (for us!) twice every century (once, then 8 years later, then next century).   After 6th June’12, next transit of venus will be in the year 2117 (unless you have the secrets of long life, you won;t live to see it again).   The last time this event occurred (as it happens on pairs) was on June 8, 2004.

Stellar events (like planets moving) take time.  The Transit of venus is – simply put- us from Earth viewing the Sun and Venus. Planets are moving around the Sun in different orbits (circular or elliptical paths).   Because of the geometry of shapes and distances involved (ie planets are spheres, and distances between Sun, venus  & earth are vast!), what we view from earth changes. Specifically, where on Earth you are located makes a big difference to the exact image you will see..   It’s a bit like watching the Football in a field being kicked about – what you see depends on where about in the auditorium / seats you are at.   It’s one event (the ball moving on the ground.. but thousands of people watch it from different parts of the stadium..).

Visibility of transit of venus

Anyway, when the transit of venus starts, it will be different times..  for different parts of the world (time zones).  Here’s the thing- for some people, it will actually be middle of the night!  That means they can’;t see the Sun (!), and if ya can;t see the Sun, you can’t see Venus going in front of the Sun.   In the map attached, you can see the shaded parts of the world  `No transit visible’. If you are in one of those counties, or parts of those countries, alas, you are having night time..  so you won;t see it.  (parts of South America, parts of Africa).   For everyone else, the transit of venus is visible..   at least the beginning, middle, or end of the transit.

For the people in Australia, for example, the time happens to be Sunrise..when transit of venus starts…Lucky them.- they get to see the whole event…from beginning  to end.  For those of us in UK, as Sunrise occurs (our time), the transit is almost over, but we still get to see the end of it..

In the NASA site, Fred Espenak gives times for this transit as below.  I have added simple *explanations of what we `see’

Error: Twitter did not respond. Please wait a few minutes and refresh this page.