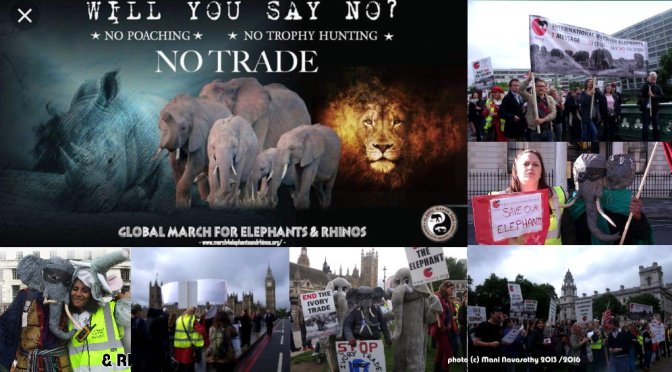 Join me and thousands of other supporters in a Global March for saving Elephants & Rhinos!  This is taking place on saturday 13th April’19 – all over the world…and there is one in London.  here are the details taken from their facebook page (link below).  -Mani

The 5th Global March for Elephants and Rhinos will take place on April 13th with cities around the world joining in a huge day of action for endangered wildlife.

You can join the facebook event for this (organised by group `Action for Elephants UK events’) using this link
https://www.facebook.com/events/626994967732777/

Following blurb taken from facebook event organised by `Action for Elephants UK’
———
“GMFER2019 is timed to take place shortly before CITES Conference of the Parties (CoP18) in Sri Lanka on 23 May to 3 June. We will be calling for support for the CoP proposal to uplist elephants to Appendix I, the highest level of protection, and for the rejection of proposals to allow ivory trade and trade of the Southern White Rhino.

Our key domestic action will be to call for the government to ban the import of hunting trophies of endangered species to the UK. Around 2,500 gruesome trophies have been brought home by British hunters over the past decade – heads and other body parts of endangered wild animals including elephants, lions, zebras, hippos, giraffes, leopards – all killed for ‘sport’. Thousands of lions are raised on farms in South Africa for the brutal ‘canned hunting’ industry, where they are kept caged from birth and finally shot by trophy hunters. These cruel and barbaric practices continue to decimate already endangered species and drive them closer to extinction.

Trophy hunting is cruel and indefensible – it has no place in this day and age, when the ongoing ‘sixth extinction’ has already claimed 60% of the Earth’s fauna since 1970. We call on the government to take an unequivocal stand and permanently ban the import of hunting trophies from all endangered species.

The broader theme of the event is Save Our Wild World. Wild animals and their habitats are everywhere under threat. Without maximum protections by the global community and CITES, elephants, rhinos, lions, giraffes and other endangered megafauna will face certain extinction in the wild. Those protections include giving them Appendix I or II status, rejecting all proposals to downlist endangered species and reopen trade in ivory and other body parts, and getting countries to unite on banning hunting trophy imports.”
———————

There are global marches taking place on this date all over the world. The London march is organised by `Action for Elephants UK events’ – who are known well to myself and my sister, as we have been supporters and participants at these GMFER marches since 2013. Poster shows 5 photos taken at the Marches in 2013 and 2016.