While studying for my Bachelor of Science (B.Sc Physics ) degree at King’s College, London (University of London) I joined many `Societies’ (student clubs), as do many undergraduates!  Mine were the Horse Riding, Pistol & Riffle shooting, Maxwell’s Society (Physics club!) and Malaysian & Singaporean Society, where I found some good friends. It was possibly the first time in adult life, that I had felt I belonged (since coming to UK).

A year or so later, I took the elected post of Publicity Officer! I also  became the `sets & props designer’ for the MSS Musical `Velapan & Minachi’  a musical that is a parody of indian films, originally written as a cartoon strip by a popular Malaysian artist, and adapted as a musical by a friend in MSS, namely Mr Joon Han Lee. I designed 3-4 backdrops and managed the construction of them, as well as have a non-signing part– Kumar- the hero’s sidekick who dies in a train accident while being chased by the Villains. I recall my birthday celebrations (the bumps) on stage- in the midst of rehearsals.

Also in KCL,  a fellow Physics graduate (who became a close friend since then!) and I  re-started the KCL `Science Fiction and Fantasy Society’ (SFFS). For publicity I remember making a full body `silver’suit (out of polythene sheets sprayed in silver paint) and putting on a Cyberman mask, walking around the canteen & student building, and giving out flyers! (my first ever dress-up in costume!).

The 3rd major Society I became involved in whilst at KCL was the Aerobics Society. Much to my surprise, I found myself to be the only guy amongst 30 girls!  Not exactly bulk with muscle or height, but I did however win their respects with my stamina and speed!  It wasn’t long before I was standing at the front of the classes at lunch time, motivating the others, and even `took’ a few classes while the usual aerobics instructor was away.  Recently looking through old documents, I was surprised to find that I had even been the `President’ of the aerobics society for a year (how ages one forget!). It was via the aerobics society, that we all took part in and walked into the history books of Guinness World Record, for largest number of people doing aerobics indoors (in Earl’s Court, London). I recall doing that again the following year as a charity event..

Novels, short stories & the Eco-awareness:                In 1992,  I completed a teen-romance novel (280 pages!) called Kitty-Love. It was my return to writing, after the comic books of 1985, and on a different level. I learnt about plotting, character development and scene-setting. The research taught me street layouts in Oxford (where it was set), designing a house (so I can visualise where the characters will be), and even creating a virtual `street’.  I set the lead characters with interests in aerobics &  rock climbing (something I actually became interested in, as a result)!   In 1994, I completed a short story collection Degenerate Solutions– with stories ranging from mini-science fiction, fantasy, romance, psychological and mild humor.  I also completed my 2nd full novel Heart’s Deep a year later, but alas, it was never even printed from my old (old!) computer (I still keep it and those floppy discs with the hope of recovering that novel!).

That story was inspired by my 3rd aerobics instructor, whom I had taken a fancy to at the time, and found out to be studying for her Environmental Journalism degree! (The lead characters in Heart’s Deep worked as Scientist in a nuclear power plant, and as an environmental Journalist! ).

Research for that novel took me into the intense world of Nuclear power plants & their designs, pollution, ecology, Greenpeace, environmental protection and so on. That changed my own life direction, where I lost interest in working as a Scientist, and became involved in Eco-campaigns for real!    One organisation I had actively supported and fundraised was the Environmental Investigation Agency, where I made some new friends. Harmony was one such friend, and I provided art illustrations for a newsletter she produced. This is where my creation `Elephantom’ was born- as a cartoon strip (only once!) but has continued as a `symbol’ on the back of greeting cards I had painted and sent to family and friends since those days! (This is a character that is going to see more daylight soon! )

`When the Rainbow Smiled’(children’s book unpublished. By Anthony & Richard).

One of my friends in London approached me and commissioned illustrations for their book `When the Rainbow smiled’ – which had the theme of different `colours’ starting out together, but falling

apart and hen uniting again! That was some 6-7 years ago, and I have lost touch with those friends (and my art works for that project). However as some work involved scanning the art and stitching parts of it together, I was lucky to have had those scans. All of those are inserted in the slide-show above! (they are mine after all).

3-4 years ago,my sister Vathani Navasothy wrote an e-book `Bulimia Hope’ (edited and published online by my brother in law, who commissioned me to do illustrations).

Nearly 90% of the art & illustrations had to be removed from the e-book due to high memory, and no doubt will be used one day by my sister for hard printing of her book (selling nicely in Uk and America via internet!) Some sample art works created are shown here.

My family and I came to the UK in 1985 as political refugees from a racial-war-torn country (Sri Lanka). That racial violence had been going on for many decades, and I have vivid memories of being on a night train in 1979 (I was 10 yrs old) and being caught up in a massacre. It was a night we thought we were not going to survive, as hundreds of people on that  same train got killed that night!  The troubles ceased for a while, but flared up again, and in 1983, my little sisters and I found ourselves roof-hoping from our house to others, while tamil houses in our street were being raised and residents killed by mobs! And when racial violence escalated, we finally left Sri Lanka in mid-1985, and arrived in the UK as refugees.

Years later, when political activists were publishing an international Tamil newspaper (sold in UK, Canada, Australia, France, Norway and other counties where tamil refugees had fled to and settled), I was asked to do illustrations for their short stories. These can be seen in the slideshow. There came a point, where all these activities were taking their toll on my Physics degree, and I made a decision to step back and focus on my own challenges!. 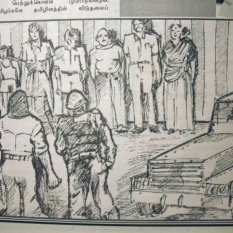 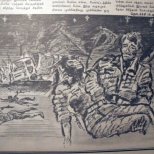 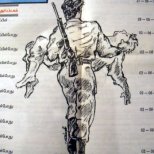 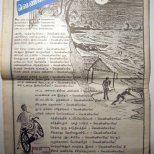 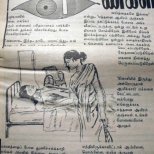 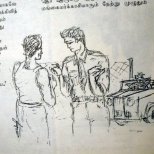 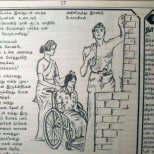 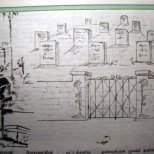 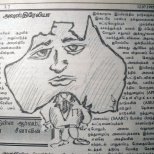 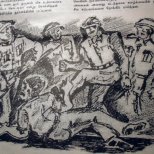