About Paganism
Paganism is the collective name given to Pagan religions (more than one!), which are based on honouring and worshipping nature and nature-related deities. Most ancient tribal religions and spiritualities can be said to be pagan, as they have and do worship earth, sky, stars, elements and natural forces. Pagan deities are male or female (god or goddess) and equally of importance and reverence. (compare this to various monotheistic religions like Christianity & Islam that have only the God). It is perhaps incorrect to state `Pagan’ as a statement of religion for one who practices it, as it is a collective term. Compare this to the example of the term `Hinduism’ which is a collective name for Hindu religions such as Saivam (those who worship Shiva), Vishnavan (those who worship Vishnu), Brahmin (those who worship Brahma) and so on.

`their’ specific religion is the true path of divine worship). 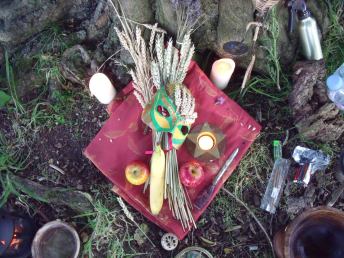 Paganism is nothing new in the grand scope of the world religions and spiritual practices, if it is seen as any path that honours, worships and respects nature and the divine in its many forms, and within all things.. animate and inanimate. This leads to the realisation that all living things such as people have divinity within and that no one person needs or should be forced to believe that he or she requires another (minister or priest) to act as a communicator between one’s self and the divine. Again in comparison, most other religions turn to a 3rd person as an intermediary, while Pagans spiritually connect directly to the divine. Note that this `connecting’ is not the same as praying, which is asking the divine of something. Connecting in a pagan sense explores pagans tuning into the divine within and without (nature, animals etc). As such humanity and being human is cherished and celebrated, so are human qualities, needs and wants- such as fertility, sexuality- which is seen as a natural and most powerful force of nature. As well as leading to creation of new life and births, life must and does lead to eventual death. Thus pagans accept, honour and respect death, and the connection to those who have lived and died- our ancestors, whose essence and energies flow inn our own physical bodies and emotional makeup.

Ritual Magic & personal responsibility
Pagan practices often involve religious rituals, ceremonies, attuning to nature, healing and of course the practice of Magic- which illustrates an underlying belief of paganism- that we have the power to change reality! Practise of rituals & magic is nothing new to ancient, tribal and many pagan religions! Of course some old practices by ancient tribal societies can now be seen as barbaric (eg. the blood and life sacrifices of Mayans) but these need to be studied and kept in context of their relevant times, beliefs and culture (Mayans were a warrior-like people). It must be born in mind firmly that as with all powers, responsibility to excercise it comes as part of holding power, and that not all humans follow this axiom of personal responsibility, or that of altruism.

Examples of Pagan religions around World- past and present
There have been many old pagan religions around the world within many ancient cultures- Egypt of the Africa,  Hinduism of the Asia, Aztec & Mayas of the South Americas, Shamanic and native Amerindian traditions of the north America & Canada,  native Aboriginal traditions of the Australia, Mauri traditions of the New Zealand, Nordic ones of Northern Europe (`Vikings’ ), Druids and Celts of the old Albian (now known as United Kingdom) and the more well known Greek & Roman cultures of the middle-Europe, and numerous others across the world. Many have shrunk or are now isolated, researched, revived, resurrected, or indeed kept alive by small groups of people. 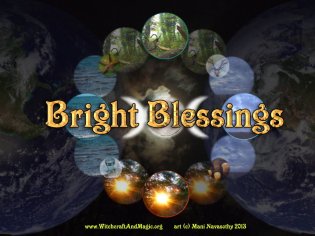 Pagan Symbology
Pagan symbols vary by the thousands- portraying local and specific features landscape, sun, moon, stars, trees, caves, birth, death, ideologies, deities, elements. Some of the most common (and currently known) are the Egyptian Ankh (symbol of life), the Pentagram, the Swastika (of the hindus, and a mirror of it found in Rune symbols of the Nordic people.. which certain past militants have `used’ for their own propaganda!)

About my Pagan activities

I was brought up as a Hindu in Sri Lanka, but after coming to the UK as a refugee, I became interested in Western pagan beliefs. After exploring this spirituality, attending festivals, conferences, workshops and courses – I chose to follow the Wiccan path more closely and was initiated as a Priest of Wicca in 1996. This path is a modern form of Witchcraft, but has a well developed religious part to it (not just spells & portions!). Some Wiccans prefer to call themselves a Witch. And so do I.

I have been running Witchcraft  & Wiccan Courses, workshops, training groups for many years now, as well as initiating others into Wicca, and running Wiccan Covens.

(This informative article was written by me in 2011 and appears in my Witchcraft & Magic website. If reproducing any parts of this, kindly credit me. Thanks).