Few days ago, I went looking online for some upcoming rituals in Wimbledon Hindu temple. I found the temple’s official website. More importantly, I found the wikipedia entry..which had a notice of  `lack of notability and possible deletion’.   This was quite worrying.     Wikipedia as many know is a living entity, billions of people use it as reference, millions add entries (woffles, bables, chatty)..and possibly a select thousands work at making those wiki articles as professional and precise as possible..(with references, citations, proper formatting and all that).

Well, I spent a few hours digging stuff in google for any references to the Ganapathy Temple in Wimbledon, and found some great references – from BBC, Guardian, Scouts, Merton Council etc.. So I put them all in, as well as a few new sections, added external links and so on..   and the wiki entry started to look a bit better.  (still long way to go yet, and am sure many others can now add similar `good and notable contents’)

Already I see that another nice person has formatted the contents I put in and made it look better. So here is the entry as it looks at the moment.

The point behind this ..to let people know that anyone with a basic internet technical skills can edit / add to wikipedia entries …for a subject they have an interested in and have experiences/ knowledge thereof.  It all adds to the content and quality of wikipedia.. modern repository of our knowledge.  🙂 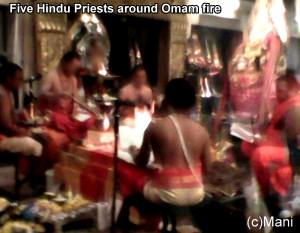 Shree Ganapathy Temple, Wimbledon, is a Hindu temple in south-west London, England, that was established in the 1980s. The main deity in the temple is of LordGanesha. There are also deities of Goddess Durga (Parvati), Lord Hanuman, Krishna etc. The Sai Mandir was opened in 1981 and is a prayer hall dedicated to Sathyanarayana Raju.

During the temple’s early years, the realisation came that there was an urgent need to educate the younger generation about Hinduism. Furthermore, the temple wanted the children to fully understand the faith at a deeper level than previously. Therefore the Sai Mandir has been running classes for many years, teaching the children spiritual education, Sanskrit prayers, how to sing Bhajans (devotional hymns) in addition to learning about other religions too. Voluntary activities take place in affiliation with local authorities and Age Link groups.

The temple provides classes dwelling on teachings of Hinduism, music and dance classes, and yoga to name a few.

Shelter for Refugees: Refugees from Sri Lanka have been given temporary shelter at the Temple in 1986. The BBC recorded this info as part of their DomesDay Project in 1986.[1]

Scouts – 23rd Wimbledon:  This temple became Europe’s first Hindu temple in the UK to be home to a Scout Group. The 23rd Wimbledon [2] was established by Scout Leader, Geetha Maheshwaran in Autumn 2012 .

School trips – Religious Education:  The school is listed in Merton Council Directory[3] as providing Hindu religious, social and cultural services for all ages, especially for schools to visit as part of their teaching of Hinduism in their Religious Education Curriculum.

The Ganesh temple has been using a building that was formally a Church and a Community Centre. Hence the interior has been a basic square shape. Reconstruction work began in early 2014,[4] and is nearing completion in January 2015. It will be based more on the style of the traditional South Indian temples.

ps.  Here are those actual links related to Ganapathy Temple 🙂