Saturn in Aquarius – coming up (3 years!)

Saturn retrogrades in mid-May (in Aquarius) and will be out of Aquarius for a short period (2nd July to 16th December). That will be time to review the lessons that are previewed over the next 3+ months.

This is just a quick note – I’ll write more soon.. as Saturn works me hard.
-Mani 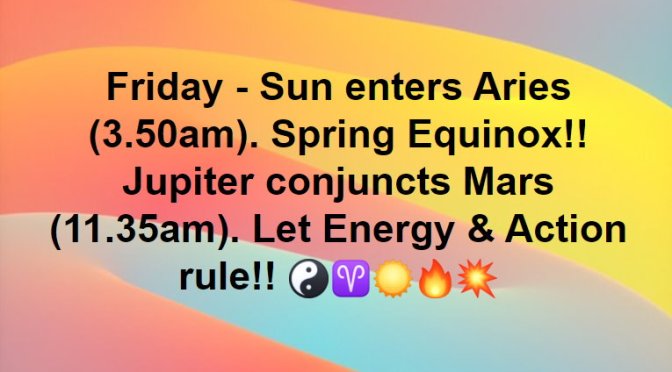 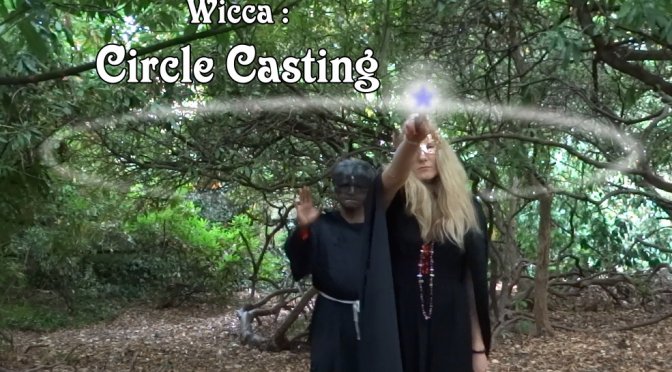 In a Wiccan ritual or any pagan Ceremony, creating Sacred space includes the casting of a Magic Circle – for safety and protection, and to keep the powers that are being worked with..so that magic can happen. Here we demonstrate the casting of a Wiccan Circle, with easy to learn words.

Traditionally, in a group or coven, the Priest hands the casting tool (a wand, an Athame or a Sword) to the Priestess. He then either steps aside or stands beside her and connects with her psychically and adds his energy . The Priestess channels his energy as well as her own energy to visualise and cast the magic circle (sphere). Traditionally they start at the North, move through East, South, West and end back in the North.

Then the magical work begins inside the Circle such as calling elemental quarters, raising energy, and invocation of God & Goddess, and more. (** Remember to ground the Circle once the full ceremony is completed!!!**)

(more videos demonstrating those will be uploaded soon).

e-book: How to become an initiated Witch (Coven Guide) 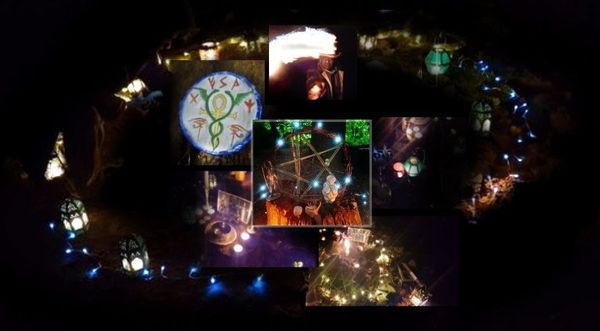 Check out this Meetup Group → 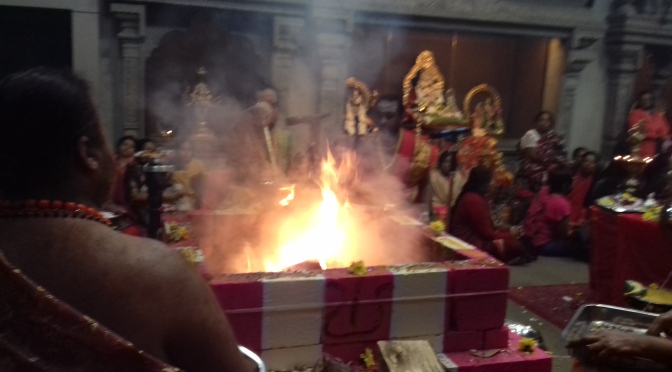 During Chandi Homan, a form of Durga – called Chandika Devi is invoked into the fire, using mantras recited for several hours by the Hindu Priests (Ayars). This includes reciting the 13 chapters of the stories of Durga Goddess slaying various demons, and is said to be highly auspicious for all participating or even merely being present and witnessing the ceremony.

The Homan concludes when the energies of the Goddess are moved from fire to the Kumbams (blessed water vessels on altar) and those are taken to be poured over the statue of the Durga Devi. Remnants of the water poured over statue are highly sacred and blessed and have the energy of Durga Devi, and are sprinkled on all the devotees by the Priest later on.

Also to be noted is the special Blessing ceremony within the proceedings. This is when the lead Priest of the ceremony is pouring sacred oil over fire in a continuous form, and others are reciting numerous blessings. That section is filmed in entirety and is included here for devotees to watch and benefit its blessings.

Do take this seriously, and watch in a mindful, reverent and spiritual state of mind – so that you can attune to these blessings and gain benefit. 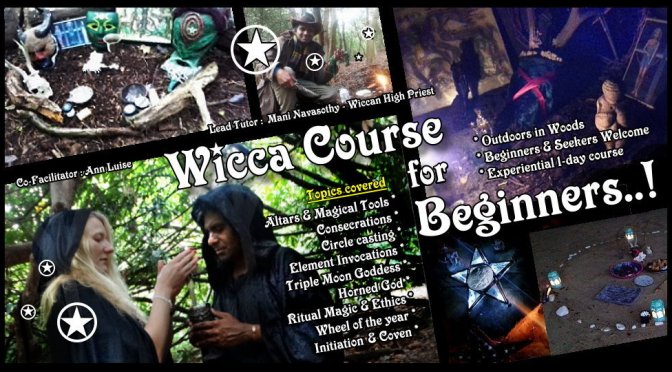 This 1-day introduction course on Wicca is for New comers, Beginners & seekers – all those interested or curious about Wicca & Witchcraft, and like to learn it all in a down to earth, friendly, experiential manner…! 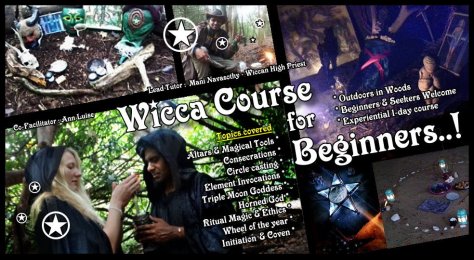 This is a basic introduction course. Brief explanations will be given as well as demonstrations, use of pathworking, meditation, energy work, some practice;

Venue:——-
This course takes place in a secluded place in Queen’s Woods, High Gate. But we initially meet at The Woodman’s Pub, Archway Road.

-Bring your own snack/ drink / packed lunch.
-There’ll be logs to sit on. But bring cushions/ blankets for your own comfortable seating.
-RAIN: If it rains, we’ll have a tarpaulin cover put up over the course area.
-wear warm / water proof clothing/ coats and suitable shoes/ trainers/ boots.
-Bring note book/ pens to take notes. (some typed notes will be e-mailed to you after you attend the course).

Like Loading...
Death of Democracy in UK??
The Parliament stands to work and represents the CURRENT WILL of the People at **any present time* Full stop!! MPs are connected to people on everyday basis through their consultations ..and are the CURRENT Representatives of the WILL of the People.
Prime Minister (Boris) should be asking the MPs what their people are asking for TODAY and acting on that. THAT is Democracy !!
Instead, a Prime Minister who slipped in through a narrow constipated back-alley politics is now trying to shut down the very heart of the Democratic process of the British People.
Well done UK!! You really are a shining example to the rest of the world..not!!!
-Mani Navasothy

Astro-climate: Next 3 weeks of thrills, spills and Towers falling!

Next 2 week there’s a mixture of trines, oppositions and squares.. So these coming 3 weeks is going to rattle us all over the place.. This weeks’ Uranus aspects are all trines..positive..but Uranus is going retrograde. So I get the feeling of Towers falling.. !!

In the immediate moment, what surfaces might feel shocking and painful…but because the aspects are trines, I do believe that it’s all going to be necessary evil/ good..for a better future. Lance to boil sort of thing..

I started to feel tremors in my own life some week back..and certainly…in last few days.. (aspects seem to hit me a few days in advance…probably cos I try to get ahead as an astrologer but they get me anyway…or maybe it’s their way of alerting me.. by putting me through the ringer first.. And what happens is I slowly `stabilise’ and can then hold the fort..for all around me..or write stuff like this..).

I’ll try and give it time to write about each of those aspects coming up over next few weeks..  (come back to this same blog post- I’ll edit it with more specific details soon).

Shadows shitting & maladjusted Magicians dancing !!
(aka. get your head sorted before you do magic and hurt anyone).

Divorce, splits or separations are hard and emotionally chaotic for anyone. In my experience ..anything that ends badly has a fall out on friends and families connected to the people. More so for magical people connected to magical groups or communities. I’ve seen elders who have been together for decades and then split and one party gets all crazy and abusive….leaving the rest of us utterly shocked..!!

One such person was even heard to have said he suspected me as some opposing force and hell-bent on cursing me.. He possibly did.. There also followed (independently..or perhaps connected) some other nasty online bullying by other magical / pagan people I had known. It was not a happy time in my life.. Many things fell apart.. I almost lost my credibility…many communities…and much more. All I could do was appeal to my Gods for Justice.

Years later..I have heard that justice has been served.. All those who had bullied me at that phase of my life have had their lives unravelled.. Some fled the country on other issues. Some lost their acquired riches…some suffered splits…Some turned in on themselves and became shambolic.

They may have cursed me hastily..without knowing all the facts…that does not make them innocent! It makes them magically irresponsible and emotionally stupid. I on the other hand was the innocent who suffered,.and wisely I only appealed to my Gods.. I did no sit down and curse anyone in return. I would never risk that.. without knowing all the facts.

Before anyone gets all hot-up, let me say again.. that I did not do any magic. I live by magic.. and truly by my gods. I don’t pretend values and ideals like some do and get hypocritical behind the scenes ( like those people did). I merely spoke to my gods and called for Justice. Gods took their time..but justice was served.

I’ve learnt much since those days.. My own magical knowledge and skills has grown since my nappy-naive days of 2012. These days, anyone accusing me of anything should be very careful of what they are saying. Be sure of your facts.. Be equally sure of your own sanity.. Don’t go chasing shadows and project them on to me.. or anyone else.  I do not take kindly to that kind of shit anymore. I follow my own ideals, heed my own gods, and warrior-priest codes. Am a Priest if you want my spiritual help. Am a warrior if you try to claw me down! Simple! (It took me decades to work this truth out..that I can be a Priest and a Warrior).

Another word of wisdom:

Too much magic without Earthly practical grounding can imbalance the mind. Your own Shadows will run amuck and grow and take you prisoner. You will loose your judgement. you will accuse others  of taking sides ..rather than seeing others as trying to help a vulnerable 3rd party/ persons. You’ll see everyone who does not agree with you ..as `friend of your enemy’ … and if you are a (maladjusted) magician / witch/ wizard, you may even do some unkind / dangerous magic to attack someone else.. where by you are attacking an innocent individual…!

I say one thing for anyone falling down this kind of shadowy path – “Frack-off off and get your heads & hearts sorted.. ! And until you do, please take your selves off any public positions of authority you hold…”

ps. recently an old Witch friend who is going through a messy split tried to draw me into their issues. It prompted me to write this. But the matter can also apply to other people in power / authoritative positions who are using their community platforms as personal propaganda platforms. Not cool! 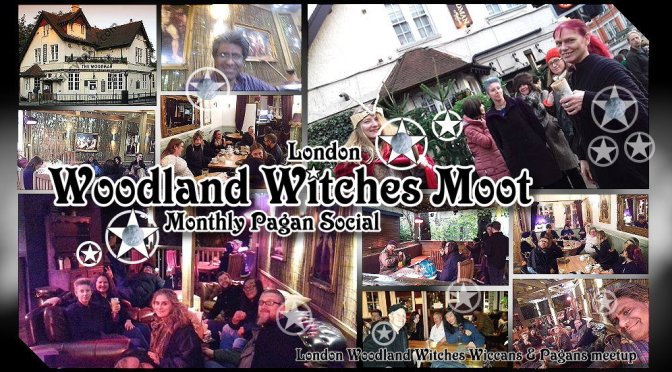 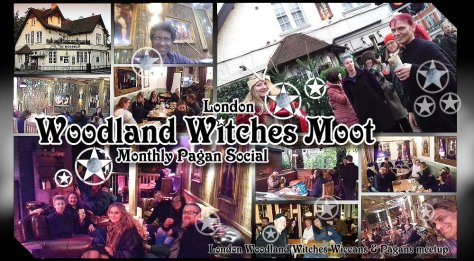 Our meetup is growing..and is popular… and before major rituals and afterwards… we end up at the Woodmans pub..socialsing . We don’t get enough time to converse.. chat ..lounge about.. get to know one another more.. and form more friendships. And especially for some attendees, our rituals might not give enough of a moment to talk to us and others.

Then there’s the case of Wicca..and all the questions you ask me.. just before a ritual.. or during setting up altars.. or just when am packing up.. or just when am ..exhausted and have to run and get my last train!!
And I really love to be in a better position to answer your questions..!

After considering all this.. we are starting our very own Pub moot.. to give all of us and new comers plenty of time..to chat, socialise and even get some crazy magical plans and projects going..

we are currently not hiring the room..so it’s an open pub environment..
If it gets popular..we’ll think about that sort of thing.. It also means there’s no fee. We just gotta turn up.. grab a large table and seats and ait for more of you to arrive.. 🙂
And you have between 7pm to about 11pm to arrive and socialise…(and beyond..but organisers will leave around 11pm).

So just come along… bring some money for your own drinks.. (wine, beer, tea/ coffee, snacks, soft drinks, dinner, crisps – whatever you fancy buying at the pub for your self).

A friendly open meeting for all interested in the old Heathen beliefs of Scandinavia and Northern Europe.

The meeting opens at 2pm with all the usual chat about everything from food to religion to football! There will be a short talk and introduction at 3pm, followed by a seasonal ceremony starting about 3.45pm. This will be about 40 minutes after which we will continue the social side until about 7pm.

The meeting is held in an upstairs room with no wheelchair access. We are currently looking for a more convenient venue. There is a 2 pounds fee to cover hire of the room.

This moot is part of Hendon Heathens – and is held on the last Sunday of January, March, May, July, September and November. Includes a ceremony and occasional guest speaker.

Join Hendon Heathens (facebook) to keep updated with this moot and other events.