Here is a photo – fresh off my digital camera – taken just over an hour ago. I’ve labeled the stellar objects you can see.   There’s Orion’s belt (of the Orion the Hunter), a waxing moon (1st quarter), Venus, and Jupiter (now lessening in brightness, and sets by about 21hrs GMT in London). [we are now in British Summer time..  so I have given GMT].

Remember, about few weeks ago (14march’12) there was a conjunction of Venus & Jupiter..  and few days ago, the moon had conjunctions with – first jupiter, then venus.  Moon moves fast ofcourse.  Yesterday it was practically next to (left of) Venus. You can see ho wmuch it has moved in just 1 day.  The distance between Jupiter & venus is also widening.. 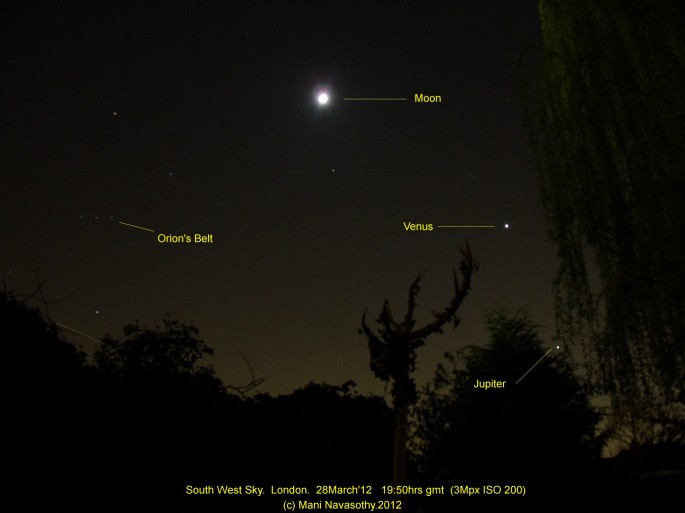 I must confess, after tracking these objects (just oberving every day or so and taking photos) and watching their conjunctions (seeing them right next to one another), I am in a strange way, quite sad to see them drift apart. It’s quite a bizzare feeling.  I mean, they are just planets, right? They move about – that’s what they do.  It’s not like they were some close friends of mine who are now going away – or is it?   well, that’s the sort of feeling I have been getting, as I watch them obsessively every night, almost (as long as there’s no clouds – and we are so lucky that it’s very much cold cloudless skies these  nights!).

These photos (I’ll put more ) show just one thing-  all you need is a small tripod, a clear enough sky, and a digital (ordinary) camera that has either night setting, or manual setting, where you can adjust the exposure/ `film’ sensitivity  (ISO setting..  goes from about 100 or 200 for ordinary to 400 or more for fast moving or dim objects). Also you need a timmer setting.   I set these ones mostly for 2 seconds, or 10seconds…press the button, and move away…so that within 2 sec, the camera triggers, keeps one it’s shutter for about 5 seconds, and shuts again..   In that time, you don’t touch it!!   It avoids hand-shakes..  and trust me, otherwise, those tiny dots (stars) will look like blurry footballs..!!
I’ve been as astrologer, looking at horoscopes and start positions on a birth chart for over 2 decades. I have had an interest in science, technology, space etc for even longer – close to  3 and a half decades..   But I must admit – only now, that those have started to propel into a highly rewarding hobby. These past 2 months have bene thrilling..  tracking these stellar objects. Not only has it been rewarding to actually see the planets and know which ones they are, but also sitting out in the garden, setting up and taking photos..   has given me a sort of relaxation, as well as peace, and excitement about how it’s developing my photography skills..  Stargazing..  wow!

I have asked myself the question why? Well, knowing the theory is one thing. but to see with own eyes, and capture it all with own simple camera makes these things `really real’!!  It makes me feel that – yes – we humans are so tiny in a vast Universe, and if this is real, so are all the other things that we see in NASA/space photos..  Stars, constellations, black holes, supernovae, distant horizons – infinity, eternal and mystical beauty of it all.

Don’t take my word for it. Go out there and take a look.  It’s amazing..  and magical out there!!

ps. If you want the unmarked original of this photo.. just mail me and I’ll send it to you by e-mail. Stars belong to no one and everyone 🙂