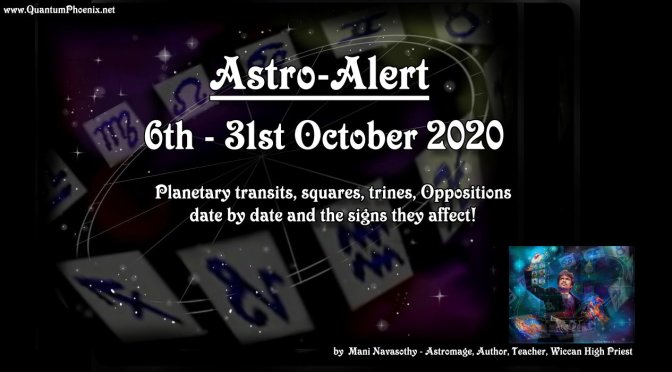 Early tomorrow (7th oct) Mercury opposes Uranus. May be stressful for Gemini and Aquarius.. also secondary stress for Scorpios (as mercury in Scorpio. ..) and to Taurus. Then on Friday (9th) afternoon Mars squares Pluto. .Aries, Scorpios, and Capricorns will be feeling very intense and afflicted by that. So between this evening to close of Friday it’s going to be difficult.
Sadly that’s not all.

Here are other difficult aspects and signs affected by them.. (ie the signs ruled by those planets).

So basically next 14 days is just hard, mad, bad ..and sad. I’d say, keep the Faith. Stay calm. Don’t over react . Don’t make fast decisions. Slow it down and process issues and trust that it will be all fine ..This after all is really what being tested in our faith is all about. 💚💫

There are good powerful positive aspects going on too..
-On 11th, Venus trines Uranus (Good for Taureans, Libras, Aquarians, and for Virgos).
-On 12th, Jupiter sextles Neptune (3rd time this year).. Brilliant for Sagittarians, Pisceans, Capricorn. On the Same day, Mercury sextiles Venus (more good stuff for Gemini, Taureans, Libras).
-On 13th Mars has closest approach to Earth (Mars currently retrograding).. Might be just intense…but that fiery energy can be put to good creative use!
-On 19th – Venus trines Jupiter ( good for Taurus, Libra & Sagittarians.. These are 2 most beneficial planets forming a most beneficial aspect. Its good for everyone.. (but bear in mind on that day a mars-square-Jupiter also going on and next day Mercury opposes Uranus.. so those other stresses might `seem’ to cloud the positive.. Just tune into the positive.. don’t get lost in the negative and loose a brilliant opportunity for harnessing the venus-jupiter energy!
-On 21st, Venus -trines Pluto.. and its after the 2 weeks of stress.. so that’s going to be welcoming energy of love, power, healing, transformations, passions 😉
-On 24th, Venus trines Saturn.. Oh my. Again. Love, friendships & relationships, artistry, long term stability are highlighted. Bear in mind Saturn only recently went direct ( after months of giving us retrograde trouble).. So now this is starting to heal, fix and strengthen matters.
-On 25th, Sun conjuncts retro-Mercury. In many ways that’s going to be positive. old issues might have positive changes, approaches or resolutions. [Generally 24/25th have good energies overall].

With so much going on.. and October being sandwiched between 2 Full moons, and the coming of a full moon-Samhain.. heads and hearts are spinning wildly and chaotically.. day to day..!

One suggestion is to focus on your spirituality, go deep, clear out doubts and dross. Focus on Creativity and use the dynamic energies being stirred up by all the aspects.. rather than let them become destructive. We must Keep working on healing our selves, not let the Devil (shadows & fears) in us dance with inflated ego as its dancing partner. Strengthen our core.. Otherwise, we just get buffeted by everyday winds storms and shit.. and be loose our minds and keep old emotional wounds alive .. It does not serve anyone or the future.

I often talk about Faith.. Doesn’t matter what God or goddess you honour and worship. Sometimes the strength is in just surrendering to the divine.. with prayer and worship.. and calling on trusted energies like Angels.. They all help.