Dear all,  it is a dark day for pagans when a bunch of ill-informed people (we are not even sure if they are actually wise Druids) have set up a very damaging entity that portrays negativity…towards Islam.  (I won;t even bother mentioning their full name here).

Many hundreds of us open minded and tolerant interfaith networking Pagans, Wiccans & Druids have reported that `other’ group to facebook…but we’ve had messages saying facebook did not find it breaching their policies of hate speech.

No wise Druid would ever say or support such a thing…so any vexative, shit-stirring people could have set up such a negatve group..   which would only give a bad name to the genuine and wise Druids..   (The Druid Network actually is recognised as a charity and has worked to gain `religion’ status in UK!  Link below).

A bunch of Druids and pagans have now set up their own Positive group..   which is called `Druids United against Islamaphobia’   – So I ask you who is open minded, wise and sympathetic – in the interest of unity & diversity, interfaith working and a peaceful future – to join this NEW GOOD Group…and show your support.

2.  The Druid Network –    “The Druid Network aims, through connecting individuals and groups together, through coordinating efforts and initiative, and through actively interfacing with public bodies and the media, to Inform, Inspire and Facilitate Druidry as a Religion.”

blog: Calling something Wicca – then, now and tomorrow 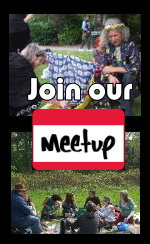