“To speak the Truth, to honour our spoken word, and to be Just & Fair in all our dealings..!”

I’ve followed (King) Arthur Uther Pendragon for a long time now.. and admired what he (sometimes single handedly) stands up for and injustices he stands up to! Had the privilege of inviting him to facilitate one of the rituals at PF London in 2005-6 when i was Events Organiser for PFL. Some years ago when he said to a group.. hold everywhere sacred..(not just Stonehenge) I took it to heart and have been keeping London as my sacred focus..instead of always running out of london to other spiritual places all the time.. And appreciate his sentiment that if we pagans want to keep Stonehenge sacred in the eyes of tourists etc at festive times, we should `robe up’ and be seen in our magical/ priest/ priestly appearance..

So it is finally my honour to be Knighted by Arthur at the Templar Church yard – this time last year (2017) in London… at the culminating ceremony of a day of rituals around London. (there were others.. warrior Priestesses & priests who were knighted at same event..and we stand together in fellowship). Sir John Crow was the first, followed by Jenny, Debbie, Donna and a number of us. Their photos are in my other album for this Sacred day of rituals’ 🙂

To the `uninitiated’ it may be seen as a curiosity, a gimmick.. but for some of us, this – done in a magic circle, on sacred grounds (Templar Church in London, on the spot where the old Lamb building stood before it was wiped by WW bombing in 1942).. this act matters.. and takes on deeply significant proportions.

“To speak the Truth, to honour our spoken word, and to be Just & Fair in all our dealings..!”
I’ve always done this.. so it isn’t so much a beginning of the journey but a recognition of what i have been doing for a decade and a half.. and I will continue to do so..

Druid prayer:
`We swear by peace and love to stand,
Heart to heart, and hand to hand,
mark O spirit and hear us now..
Confirming this our sacred vow!’ 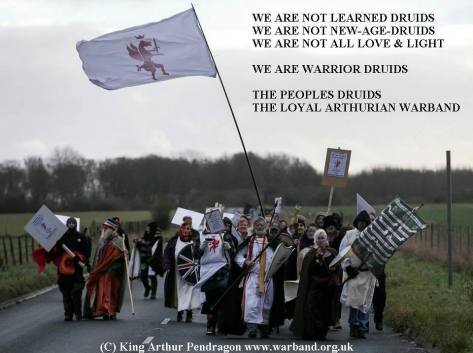