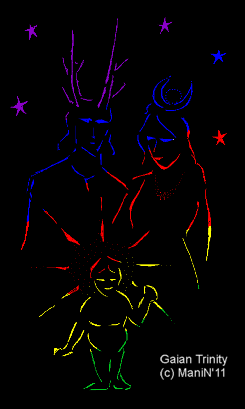 It was 14th March 1996- when I first did the sketch work for a painting called `Gaian Trinity’.

It featured the Horned God in a cloak in the back, Earth Goddess seated naked on a small hill, with a child on her lap..   There have been many other manifestations of that energy…  3 annual `Gaia conventions’ which I created for PF London in 2007,08,09…a new e-magazine Gaian Times launched earlier this year.

I did this `pin hole/ paper-cut’ mini-version of the Gaian Trinity..   scanned it and coloured it  (animated it with colours, but that’s only for my beloved wife’s eyes only.. it’s her special Yule card..online..:-)

Here’s one of the frames from that animation..

I’ll let you know when the actual art work is done..