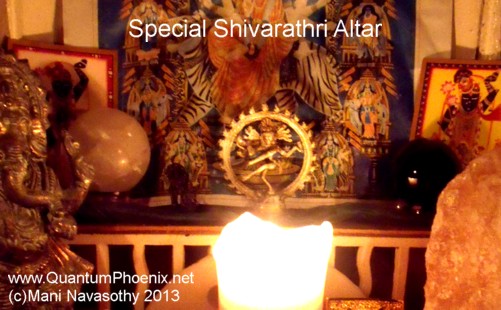 Maha Shivarathri (Shiva’s night) is one of the sacred Hindu religious days.

Although I did not stay awake all night in prayers and worship, I began magical workings the night before on my altar – and continued some personal prayers and a sacred ritual last night (midnight onwards). Am writing this with the hope that reading about it may give some of you spiritual inspiration – to either do similar ceremonies, or create your own rituals.

Though I have lived in London for over 25 years, my first 15 years of childhood & teen life was in Sri Lanka, where I had attended hundreds of temples and watched or participated in numerous Hindu rituals, as well as read and self-taught all of the Hindu mythologies and Stories (Puranams).  It is those that continue to give me my core values – of spirituality, upon which many layers of Western magical practices have been built on in the past 25 years.

(Before starting this work, You may wish to read extensively about Shivarathri and Shiva- from my previous blog post on Shivarathri here).

The following is a set of suggestions stemming from my own hindu rituals.

My work began with purchasing a brand new tall Pillar (white) candle. The one I got is a 70 hour candle. I then took it to the local Temple, where (in London) Shivarahri ceremonies were going on already. Hindus are used to lighting lamps, so am sure the devotees would have been a bit perplexed, so I had the candle in a ruck sack and carried it mindfully on my back, as I prayed and circled the temple’s inner altar 3 times. The purpose of taking the candle to the temples is to consecrate it and bless it with the pure and divine energies.

If you are unable to do this, you can alternatively – take the candle to a place of nature that is untainted and pure.. and have it there, for a short while and ask natural energies and divine forces to bless it. I would advise that you do NOT do any complicated rituals of blessing this candle. Do not inscribe any complex symbols either. All that is needed is true simplicity and natural or divine energy by way of it’s own presence.

Once the Candle has been blessed and brought home to your intended Altar, the altar itself needs preparing. Now I have in the past made a huge fuss about getting the altar perfectly right, and purifying it etc. But this time whatever the state your altar is does not matter. It is every day life and ways of living that (may) have brought about a certain way your altar looks (dusty? cluttered with magical items unused? objects that  detract instead of adding positive energy? etc).   As we are about to deal with Shiva – an important deity who – as long as you honour and worship him whole heartedly – forgives and blesses  you,.., you need only make a heartfelt genuine effort and just carry out this ritual.. Purity of intention is more important (for this and any ritual, in fact).

Tidy the altar and make space for the candle. If you have a Shiva statue or art work, place that in a central or prominent position. If you have any long `phallic’ style crystals that can `stand up’ – do place them (or a main one) on the altar.   This will come to represent the `Shivalingham’ – which in fact is a representative of the sacred union of the Phallus and the Yoni (it is found in most Hindu temple altars!)   Do wash the crystal beorehand and place on altar.

Flowers, a glass of water, small glass of milk, honey, fruits are also appropriate to have. Incense sticks and of course small tea-light candles are great additions…and a small bell, if you have one.

Remember the mantra `Om Shivaya Nama’  or the variation, `Om Nama Shivaya’.   This is something you can chant either out loud, while ringing the bell at certain points. Or you may chant the mantra inwardly and quietly (as I did last night, as other people in the house were sleeping by midnight!). Again, true worship and devotion with purity of such intent carries the ritual more so than the actual steps!   (Remember the story of the King and the Devotee whop both built a temple each for Shiva – one a large temple and other an astral temple in the mind, to which Shiva gave impirtance…It is one of the Hindu religious stories (Puranams))  It is mentioned in detail in my other Shivarathri blog.

Light the central candle as you chant the mantra, while visualising the great flame that is Shiva. Recall the story of the great flame, that has no beginning or end, no top or bottom, which Lord Brahma and Lord Vishnu attempted to discover).

You may wish to light additional small tea-light candles around the central candle.

Be seated in front of your altar ( dark room is best), and stay in a meditative state, while chanting Shiva’s mantra. You  may wish to offer flowers to the candle, and or the Shiva statue (or picture), by peeling petals and gently showering the statue / artwork with them.   If your statue is water-proof, and is prepared to stand in a water proof dish or deeper container, you may also wish to perform an `Abishekam’ (ritual bathing) – with water,milk, honey etc [I shall write about this another time, in detail].

During the Flame meditation, you may wish to hold the candle by both hands in front of you – at just below Chest level, so that the candle flame itself is on level with your Solar Plexis Chakra (the point at which on chest area ribs join – the mystical place where Sun energy is said to reside). You may carefully try to imbue your Solar Plexis chakra with the Shiva-Candle-Flame, while chanting Shiva mantra, as a way of communing with Shiva’s flame.  (Warning: should this become uncomfortable – a sit may if you have never done t before – use a large Crystal or stone or some soil or salt in your hands, to ground that energy, and – try the exercise another time, gently!).

It is advisable to stay in the chanting & meditative state for a long period – That is the very nature of this Ceremony  – prayer, worship and simple but pure communing with Lord Shiva.

What to pray for

You may wish, after the prayer / meditative session has reached a conclusion, to hold the central candle in hands (raise slightly so the flame is at heart-level now), and radiate divine energy, healing & unconditional love ..to other people in your life. Do not complicate this stage. Just send pure light & love. Do not try to be specific.